January is not just a time for celebrating, visiting with family, setting and breaking New Year’s resolutions, but it is also the month that is dedicated to raising awareness for cervical health. Cervical cancer is the fourth most common cancer in women worldwide, and 80% of mortalities from cervical cancer are from developing co 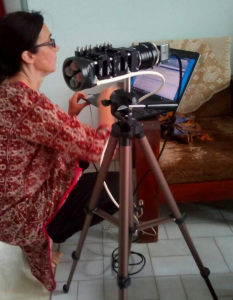 Clinicians and researchers have used optical technologies in cervical cancer detection devices for use in low resource settings before; however, limitations such as poor healthcare infrastructures and a lack of accessible pathologists have restricted their success. Using Mueller Matrix imaging, a modality that uses polarized light to highlight small changes in cervical tissue that are typical of this disease, Dr. Ramella-Roman’s team developed a device that can be used by a person with limited training. To test their system, they collaborated with Dr. Purnima Madhivanan, Associate Professor of Epidemiology in the Stempel College of Public Health at FIU and Director of the Public Health Research Institute of India (PHRII) in Mysore, India. They travelled to Mysore where they screened a group of twenty-three volunteers in health camps in the surrounding of Mysore as well at the PHRII clinical facility to test the performance of the device for detection of cervical cancer.

The acceptability and ease of use of the device were rigorously tested. The vast majority of practitioners and patients were interested in the imaging procedure, that ultimately could speed up the diagnostic process. Further work is necessary to establish the sensitivity and specificity of this methodology, and Dr Ramella-Romans’ team is scheduled to travel to Mysore in summer 2018 for further testing.

Ultimately the development of this easy-to-use imaging system for the diagnosis of cervical cancer is potentially life changing for many women with little or no access to specialized healthcare.