Special congratulations to Nicole Sevilla, a BME undergraduate student, for winning 1st place in the poster competition at this year’s Engineering Conference International (ECI). This year’s conference, titled, Advances in Optics for Biotechnology and Surgery XV, brought together scientists, engineers, and clinicians involved in the application of optics to biotechnology, medicine, and surgery.

After being selected as one of only three finalists, Nicole presented her work in a 20-minute talk to the entire conference audience. With only a few hours to prepare, and competing against a post-doctoral fellow and a current PhD student, Nicole came away with 1st place honors and a $500 prize.

Nicole’s presentation was the culmination of a two-year project on a system known as the high-resolution microendoscope (HRME). The HRME is a non-invasive, fiber-based imaging device that allows clinicians to characterize epithelial cell nuclei of potential neoplastic (cancerous) tissue in vivo. Currently, the HRME 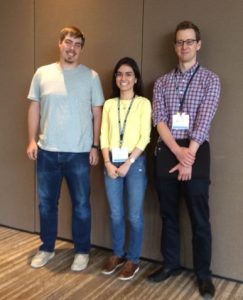 fiber probe’s (<1mm) small diameter and its sensitivity to motion makes it difficult to slide across and image large areas of tissue.

Nicole’s project was to create a solution. She explains her thought process as, “Instead of attempting to drag a tooth-pick like imaging probe across uneven tissue, why don’t we drag a pen-like rolling probe?”. As a result of that idea, Nicole designed and tested the rollerball HRME (rbHRME). The rbHRME consists of a pen-like case housing the HRME probe and ball lenses that help provide a rolling translation at the end of the probe and preserve image quality. The novelty of Nicole’s project, the rbHRME, is that it is a “rolling” optical system.

Presenting her work and winning 1st place was a tremendous accomplishment. Nicole described the experience, “Not only was the opportunity to share my work with various experts in the optics field a gratifying experience and a great way to practice the art of communicating science, but also the amount of positive feedback that I received during the conference about my project was incredible. It truly made me realize that my hard work over the last 2 summers was valued and that it has the potential to make a big impact in diagnostic imaging”.