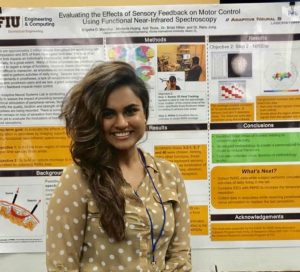 Throughout my entire life, I have always loved the STEM field. Maybe it was because I have always been a curious person. Something about science made me wonder more and more and get more and more curious about different things… Whether it was spending hours upon hours trying to understand exactly how and why something occurred in nature or trying to figure out exactly how to fix my computer and fixing it myself or even just spending hours researching a random science articles, this has always been me since I was a little girl growing up in my little island of Trinidad and Tobago. My grandmother always told me that she never had the opportunity to study science as much as she wanted to when she was younger because that was not the norm, so that always encouraged me to work a little harder and a little better. It made me feel grateful to have this chance that many women across the world did not have at that time.

When I was around 16 years old however, a close male relative, who I considered a role model to me, questioned my interest in the STEM field.  “I don’t understand why you think that you can be an engineer when guys struggle to make it in this field and you are a female” and I thought this was the most absurd thing that I have ever heard in my life. Even with group projects for classes such as physics, the females I the group were always told to sit and write the report while the guys did the circuitry and lab work. Why couldn’t we just do it together as a team?  What was even more absurd was that this was not the first time that I had heard this. From male professors, to boyfriends, to random guys in classes, to people I didn’t even know, they believed that because I was female that I would not have made it as a good engineer or a woman in the stem field.

Being the person that I am, again, this sparked my interest. Had other women been exposed to the kind of comments? Were we not smart enough or going to the same classes as the male students in the community? Were we not taking the exact same examinations? Were we not considered equal when “science” came along? What was the issue? Would I really not be a good engineer merely over the fact that I am a girl? I just didn’t get it.

So, I decided to investigate. I did a study when I lived in Trinidad and Tobago which studied the STEM participation in different science fields and if they wanted to pursue a career in them. My study actually showed that within 200 girls in my city, only 40% of them studied science, and that only 80% of that population wanted to continue their education in STEM. Why?

About one-in-five (19.57 percent) U.S. engineering students are female, according to the 2014 American Society of Engineering Education Engineering Statistics.

Why aren’t women driven towards this field like the way I was? In my opinion, women are more than capable to pursue a career in STEM. Despite all of the derogatory comments that I was given, I decided to pursue a carrier in stem and get my bachelors in BME, and here we are.

As a woman in the STEM field, we are strong, we are strong because we are able to overcome all difficulties within our path in order to be here.

For example, the biomedical engineering chair is a woman. Ranu Jung, the person that basically runs the administrative biomedical department, is female. In FIU’S College of Engineering, and especially in the BME department, there is a vast number of female students, who are breaking boundaries every day.

As women, and as individuals in STEM, we should be valued— for who we are as a person, not based on gender, ethnicity, religious affiliations, or any other factor that may alter the way someone thinks.

As women in STEM, we are strong, we are capable, we are diverse, we are full of life, we are valued, we are proud, we are equal, and we should not stand for the misogynistic comments and actions that are bestowed on us. Which all makes us a perfect component and complement to the STEM field.

I love being a woman in STEM, and I look forward to making future advancements in my career as one.

About the author: Brigette Manohar is an international student from Trinidad and Tobago. She is an undergraduate senior from the department of biomedical engineering. She works in the Adaptive Neural Systems Lab with Dr. Ranu Jung. She is the treasurer of the Biomedical Engineering Society for Spring 2019. She plans to attend graduate school to attain a master’s degree in neural engineering.