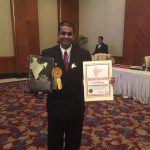 Hindi phrase translated to English as “Jewel of India”) is one of the highest Indian diasporic awards granted annually to non-resident persons of Indian origin (NRIs) by the NRI Welfare Society of India. The award is granted at the Society’s annual congress on the eve of India’s Republic Day,[1][2] in conjunction with national Pravasi Bharatiya Divas celebrations. The award ceremony is attended by senior members of the Government of India and of the Supreme Court of India. The number of awardees varies each year, but is generally about 25 to 30. Criteria for award selection are not published by the Society; award selections are made among the Society leadership and awardees are invited to attend the conference in New Delhi to accept their awards. The award carries no benefit other than its own honour; no cash or other benefit accrues to the awardee.