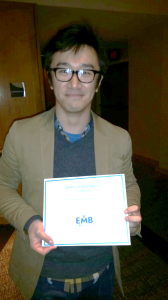 Yinchen’s research is supervised by Associate Professors Wei-Chiang Lin and Jorge Riera. One focus of his Ph.D. research is to develop a novel spectroscopy imaging system to spatiotemporally investigate intrinsic physiological characteristics of in vivo brains. A provisional patent application about this system was filed in 2014 (US 61/938,376, Lin and Song). This system is being used at the Neuronal Mass Dynamics (NMD) lab to localize epileptic foci in a rat model of focal cortical dysplasia. Such preclinical study attempts to verify the capabilities of this system to demarcate epileptic cortex in vivo, a work being evaluated in humans by Lin (the Biomedical Optics lab) in collaboration with surgeons at Miami Children Hospital. 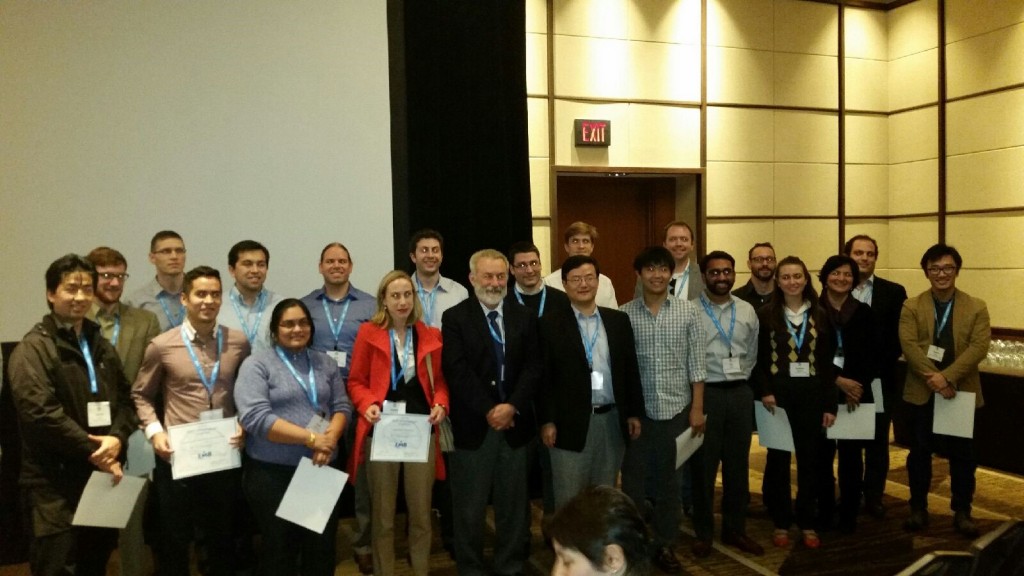 For the BRAIN Grand Challenge Conference, Yinchen Song presented the most important results obtained using the preclinical model of focal cortical dysplasia. This part of the work is being primarily carried out at the NMD lab under the supervision of Riera. In this project, the authors utilized a “double-hit” rat model of focal cortical dysplasia, which recapitulates the key pathophysiological characteristics of one of the most common focal epilepsy diagnosed among pediatric patients. To localize the irritative zones in the rat brain, they performed simultaneous EEG-fMRI recordings, in collaboration with Fahmeed Hyder, professor of biomedical engineering & diagnostic radiology at Yale University, and scalp EEG recordings using a 32-channel mini EEG-cap for rodents (Patent application US 13/641,834, Riera, Sumiyoshi and Kawashima). Sophisticated analyses have been conducted on all these recordings and results discussed with a pre-surgery evaluation committee at the NMD lab to determine the area on each rat’s skull for a craniotomy. After the surgery, the neurovascular coupling effects of the exposed cortical area during the interictal and the ictal periods were investigated using a 16-channel micro-electrode array, laser Doppler flowmetry and intrinsic optical imaging system.

This is the first study capturing the spatiotemporal electrophysiological and hemodynamic signatures from the in vivo brain of a rat model of focal epilepsy with recurrent seizures during the ictal periods. It also demonstrates that the epileptic foci can be efficiently identified using state-of-the-art techniques, which could shed light on the improvements of human epilepsy surgery. Furthermore, the outcomes of this project could fill the major knowledge gaps on the interplay between the IED-related BOLD activation and deactivation, and their relevance to the alterations in the brain networks. It could also provide opportunities to explore the impact of neuronal disorders on individual cells and their networks, which in turn may lead to the discovery of new means to treat and prevent brain disorders.

The research team is currently engaging with experts at Miami Children’s Hospital, University of Miami and Florida Hospital (Orlando) for future collaborations on human studies. The ultimate goal of these collaborations is to bring the state-of-the-art techniques developed in the Biomed Optics lab and the NMD lab to bedside, and hence, improve patient care.