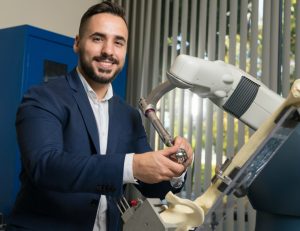 Brian Castillo is the kind of young professional Florida Gov. Rick Scott wants to see more of. With a BS in biomedical engineering in hand, the 2016 alumnus stepped immediately from the commencement stage into a job with the South Florida division of medical technologies firm Stryker. Today the 25-year-old robotics systems engineer (pictured above) is leading a team in the design, development and eventual market release of a robot for use in knee and hip replacement surgeries.

That perfect example of a graduate’s transition from school to employment gets at the heart of the two-term governor’s ongoing demand that Florida’s 12 public universities do more to meet the needs of Florida’s companies. In response to Scott’s steady drumbeat on the subject, the State University System’s governing board in 2014 began measuring the institutions against a list of key performance indicators, among them: turning out holders of bachelor’s degrees ready to enter the workforce.

At the same time the official economic development organization for Miami-Dade County, The Miami-Dade Beacon Council, has undertaken efforts to foster areas of potential growth within the region and ensure a corresponding talent pool.

“What we recognize is that education is the foundation of the strategic plan that will create economic sustainability for all of Miami-Dade County,” says Joseph E. Hovancak, vice president of the organization’s One Community One Goal initiative, which strives to create an environment for significant job creation in target industries. His office has brought together the presidents of local colleges and universities and the Miami-Dade County Public Schools superintendent under the umbrella of the Academic Leaders Council, of which FIU President Mark B. Rosenberg served as chair from 2012-2016. The group meets quarterly to discuss skills gaps, and its members interact directly with executives looking to either expand their operations or move to South Florida.

“Companies want to feel confident in the environment they’re in and that there is a prospect for long-term growth,” says Jaap Donath, the Beacon Council’s senior vice president for research and strategic planning. The willingness of higher education leaders to talk about workforce needs and engage executives “helps make the case that you don’t have to go outside the area to grow your company.”

FIU has embraced the challenge of getting graduates into meaningful work that moves the economy forward and relies on a variety of approaches to guarantee they can contribute what their employers need to stay competitive.

FIU is one of 81 public doctoral-granting universities in the nation that has achieved the top Carnegie classification of “Highest Research Activity.” That ranking acknowledges research productivity and a quality of output commensurate with that of some of the oldest and most renowned institutions of higher education in the country. It means that FIU successfully competes with the best schools in the country for grants from agencies such as the National Institutes of Health and the U.S. Department of  Transportation.

Since 2015, FIU faculty have obtained more than 60 patents. The kind of heavy-duty research activity required to create new technology benefits not just students but the companies that hire them after graduation.

Aside from providing exciting, cutting- edge classroom instruction, professors involved in high-level research often invite students into the lab or on eld excursions. Once reserved exclusively for master’s and Ph.D. students, such opportunities are increasingly open to undergraduates — something that bodes well for tech and engineering industries that rely heavily on innovation.

Castillo, the robotics systems engineer, agrees that his hands-on campus lab experience made him workforce ready. Interested in prosthetics-related projects being run by multi-patent holder Ranu Jung, who is the Wallace H. Coulter Eminent Scholar, a fellow of the National Academy of Inventors and chair of the Department of Biomedical Engineering, Castillo asked if he could participate in the work.

“She was more than willing to help me and allowed me into her lab,” Castillo recalls of what turned out to be a career-impacting move. “That early exposure helps me still with research and concept development. I also got exposure working on a team and presenting concepts and accepting feedback. All that was critical and really helped shape me as a young professional.”