At 26, FIU alumnus Rigoberto Roche has reached a level of scientific success that many recent graduates can only imagine. 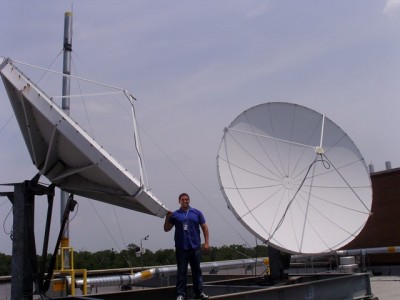 During his internship with NASA, Rigoberto Roche helped provide the data relayed between orbiting satellites and ground stations. He is now working at NASA fulltime through a one-year Pathways Program at the John H. Glenn Research Center in Ohio.

His work with the National Aeronautics and Space Administration (NASA) includes writing complex code for the International Space Station, as well as monitoring telecommunication satellites that serve missions such as the Hubble Space Telescope.

A 2011 graduate with bachelor’s and master’s degrees in biomedical engineering, Roche is a participant in the Pathways Program at NASA’s John H. Glenn Research Center in Cleveland, Ohio. After completing the one-year program, Roche will begin a fulltime position with NASA in 2014.

“I give thanks every day for having been given the opportunity to work with so many bright minds in one place,’’ said Roche, a Cuban immigrant who came to the United States with his mother in 2002. “I didn’t speak English or know how to turn on a computer. Now I write code for one of the most advanced computers in the world, orbiting the earth. Every day I’m doing this is truly a dream come true for me.’’

Roche, who arrived in the United States with a severe visual impairment, plans to bring his mother to the Kennedy Space Center in January to see firsthand the results of his work – the launch of a telecommunication satellite network that represents NASA’s next generation spacecraft – created to provide the space program with around-the-clock data transmissions.

“To know that a small part of that payload has something I worked on inside, it’s honestly the most rewarding experience I could ever feel,’’ Roche said.

The road to success for Roche was far from an easy one.

Driven, motivated and disciplined, Roche overcame his physical challenges and earned two internship stints at the NASA Goddard Space Flight Center in Greenbelt, MD, one of five out of nearly 50 applicants accepted. 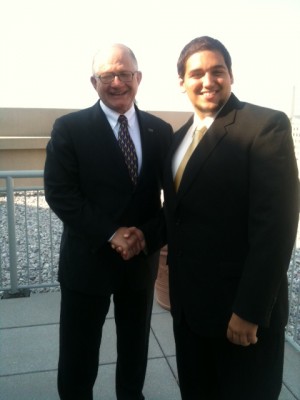 “The key quality that I saw in him was his level of commitment,” said Fernando Miralles-Wilhelm, an associate professor in the department of civil and environmental engineering at FIU. “We had a limited number of sponsored spots from FIU. Rigo was part of the first class of interns that we sent out.”

During his first stint at Goddard, Roche was assigned to develop a tool to allow scientists to measure the rainfall variability of a satellite.

Later, at the request of Goddard scientists, Roche returned for a second internship to continue his work.

“They had five years of data and I had to create a tool that sorted the information,” Roche explained. “They needed someone to write software so they could manage the large database that they had.”

His mentor at Goddard was Ali Tokay, an expert on instruments that measure different levels of rainfall. Tokay assisted Roche on the theoretical aspects of the project.

“He was the science person and I was the engineering person,” said Roche, who presented his work at an American Meteorological Society (AMS) conference in January 2013 and will be published in the organization’s journal next year. “He knew the theory behind how we needed to analyze it and I knew the coding side.”

“It was very impressive how he was able to step from one internship to another and then to a job offer,” Miralles-Wilhelm said.

Roche gives credit to Miralles-Wilhelm for being his mentor during his time at FIU and for his internship experience, which helped him get the fulltime position at NASA.

“Because of him, I am here,” Roche said. “He was supportive in every way, not only from intellectual support but for moral and physical support. Because of him, I was able to go to Goddard twice. Goddard opened the door for me to get my full-time position here.”