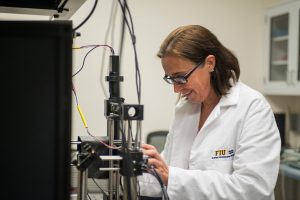 Congratulations to Dr. Jessica Ramella-Roman on her election as an SPIE Fellow! Dr. Ramella-Roman is best recognized for her achievements in spectro-polarimetric techniques for diagnostic applications.

Ramella-Roman’s research in the Medical Photonics Laboratory focuses on the investigation of non-invasive methodologies for diagnosis of disease based on light-tissue interaction. Ramella-Roman and her team are developing new imaging methodologies combining polarization sensitive techniques and non-linear microscopy to investigate anomalous organization of the extracellular matrix in several biological environments. They are utilizing these methodologies to investigate preterm labor a condition that affects 10 to 15% of all pregnancies with severe consequences to mother and child. They are also researching early signs of Diabetic Retinopathy through the combination of imaging spectroscopy and Two-photon excitation phosphorescence lifetime imaging. She is currently working with TAMU, UCLA, and RICE on a new NSF funded ERC: PATHS-UP. This cross-institutional academy-industry partnership is aimed at developing affordable health devices and systems for underserved communities, with an emphasis on diabetes and cardiovascular diseases.

Jessica Ramella-Roman has served as an associate professor at Florida International University’s Department of Biomedical Engineering and on the Research Scientist Track in the Department of Cellular Biomogy and in the Department of Opthalmology since 2013. She received an electrical engineering degree from the University of Pavia, Italy in 1993 and worked for five years in the semiconductor industry. She returned to academia in 1999 to pursue a Ph.D. degree in bio-optics and received a Master’s and Ph.D. degree in Electrical Engineering from Oregon Health Science University in Portland, Oregon in 2004.