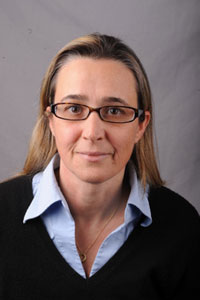 Dr. Ramella-Roman, a world expert on optical imaging, who is working on ocular diseases associated with diabetes, is joining the department September 2013.

Jessica Ramella-Roman, a researcher in the area of bio-optics has joined Florida International University as an associate professor in the Department of Biomedical Engineering.

Ramella-Roman’s research focuses on the development of novel and non invasive technologies for the  diagnosis of disease, with particular emphasis on retinal disease and conditions that are caused by diabetes.

About 25 million people in the United States suffer from diabetes, a disease that often impacts a patient vascular system causing blindness, skin ulcers, and renal failure.

She did ground breaking work in the development and use of snapshot spectroscopic methodologies for the quantification of changes in vascular and tissue oxygen content due to the onset of diabetic retinopathy. She also focused on developing tools to monitor retinal blood flow for the detection of early signs of this disease, with the ultimate goal of preventing eye damage and blindness.

Ramella-Roman’s research focuses on the development of novel imaging technologies for the  diagnosis of retinal disease.

Previously as an associate professor at the The Catholic University of America, Ramella-Roman established a very active laboratory for optical imaging with grants from the National Institutes of Health, the Wallace Coulter Foundation, the U.S. Department of Education, the National Institute on Disability and Rehabilitation Research, and the Christopher Reeve Foundation.

She has a degree in Electrical Engineering (Laurea) from the University of Pavia, Italy and a doctoral  degree in bio-optics at Oregon Health Science University in Portland, Oregon. She was a Post Doctoral Fellow at the Applied Physics Laboratory of the Johns Hopkins University  where she developed theoretical models and instrumentation for imaging of the retina and the skin.

She holds several appointments including Senior Research Scientist at the National Rehabilitation Hospital in Washington DC, and Adjunct Professor in the School of Medicine at Johns Hopkins University.

Ramella-Roman has more than 30 peer-reviewed publications. She has served as chair of many national and international conferences, and has been a guest editor in the Biomedical Optics Express journal.  She is a member of several professional societies.