Years after his hand was amputated in a traumatic accident, a hand amputee can “feel” again, thanks to technology FIU engineers have developed.

That person – the first person with a hand amputation who has been fitted with a neural-enabled prosthetic hand (NEPH) system that has a fully implanted, wirelessly controlled neurostimulator – has been using it at home for almost four months. The results are promising to researchers who hope to restore “feeling” to people with upper limb amputation.

“Recouping the ability to feel objects again is like having my hand back, which is something I never thought possible. It’s an absolute gamechanger for me,” said Jason Little, the hand amputee. 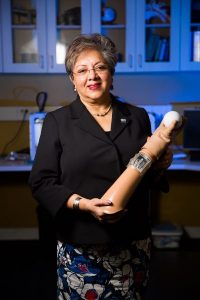 Ranu Jung, Professor and Chair of Biomedical Engineering at FIU

The NEPH system, developed at Florida International University by Ranu Jungand her Adaptive Neural Systems Laboratory team, restores a sense of touch/grasp force and hand opening by stimulating sensory nerve fibers in the residual limb with fine wires implanted inside nerves. As muscle activity controls the motors in the prosthetic hand, sensors in the prosthetic hand provide information that commands an implanted neurostimulator to deliver stimulation pulses to the sensory nerve fibers. The elicited sensations can improve control of the prosthesis.

“Jason has reported enhanced confidence in performing daily tasks,” said Ranu Jung, the chair of the Department of Biomedical Engineering within the College of Engineering & Computing and a Wallace H. Coulter Eminent Scholars Chair in biomedical engineering. “I am so grateful to Jason for believing in our research and giving us the opportunity to work with him to test our technology. My hope is that this will enhance his life for the better.”

The system’s emphasis on both functionality and usability may increase independence, productivity and quality of life.

“FIU is a solutions center with local and global impact,” said FIU President Mark B. Rosenberg. “We are always working to take our groundbreaking research from the lab directly to the people who need it the most. Dr. Jung’s work is going to change countless lives for the better.”

In 2016, the U.S Food and Drug Administration (FDA) granted an investigational device exemption for the first-in-human trial of the NEPH system. Commercially available motorized prostheses currently on the market do not provide a sense of touch, which limits the utility of a prosthetic hand.

The system is the result of a decade-long team effort. NEPH was developed in collaboration with James Abbas of the School of Biological and Health Systems Engineering at Arizona State University and builds upon the pioneering work of team member Kenneth Horch, who is now at FIU. Implantation of the device was performed by Dr. Aaron Berger and his team from Nicklaus Children’s Hospital. Berger is a hand and peripheral nerve surgeon who holds an appointment in FIU’s Department of Biomedical Engineering.

“This research team established bold goals from the outset to build a prosthetic that restores a natural sense of touch and control following loss of a limb,” said Jill Heemskerk, acting director of the National Institute of Biomedical Imaging and Bioengineering. “Dr. Jung and her team have integrated biology, electronics, and mechanics to provide a rich experience for a recipient of the neural-enabled prosthetic hand.”