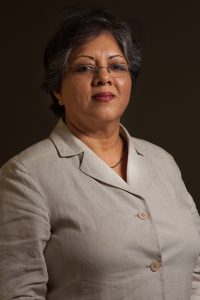 August 30, 2016 – Ranu Jung, interim dean of FIU’s College of Engineering and Computing, and colleagues were granted two U.S. patents this month for newly-developed neurotechnology. One patent is for a modular multi-channel inline connector system for connecting implanted electrodes within parts of the human body with an externally located device, or one already implanted within the body, and the other is for technology that enables efficient handling of multiple leads in a multi-electrode system.

Most often, the neurostimulators have a single lead that targets a single stimulation site. Sometimes, the lead has multiple electrodes arranged linearly at fixed distances from each other. This precludes stimulating multiple nerve sites distributed over a larger area. Sometimes, the implanted lead is routed across the skin to connect to an external stimulator in order to test the efficacy of the system before the stimulator is implanted.

Jung’s patented technologies offer the ability to package multiple leads with separable electrodes to target multiple nerves or multiple stimulation sites over a large distributed area and allow an inline modular connector to connect the distributed electrodes to a stimulator.  The modular inline connector design can simplify surgical installation procedures, improve the utilization of smart stimulators with multiple channels and allow upgrading the stimulator without impacting the neural interface at the electrode sites.

These two patents complement two other patents that have been issued to Jung and her group and five others that are pending.  All of these are the result of a broad-based effort to develop novel technology that interfaces directly with the nervous system to help people who have experienced trauma regain lost function. One of the major drivers for this neurotechnology has been a project that Jung has directed to develop a neural-enabled prosthetic hand system.   This work has produced the first implantable, wirelessly controlled, direct neural interface system for restoring sensation to upper limb amputees. Sensors on the prosthetic hand that are activated by hand opening and touch provide information that is used to control small electrical impulses that stimulate multiple nerves at various sites in the residual arm. As these nerves get activated, the information is relayed to the brain and the person experiences sensations that will help them as they perform tasks such as picking up a cookie or a cup without crushing it.