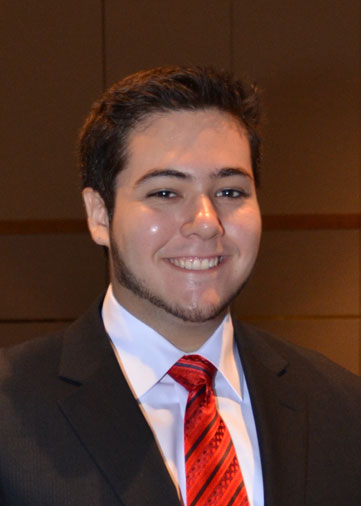 Congratulations to Victor Alvarez. He received the “Outstanding Biomedical Engineering Undergraduate” award at the Summer 2011 commencement held on August 13th.  He was given this award by unanimous acclaim from the department faculty because of his academic achievements, service to the community, and exemplary character. Among this numerous honors and awards are membership in the Tau Beta Pi Engineering Honor Society , the Alpha Eta Mu Beta FIU Biomedical Engineering Honor Society, and the National Society of Collegiate Scholars at Florida International University. He was also recipient of Florida International University’s Presidential Scholarship and the Florida Bright Futures Scholarship, Florida Academic Scholars Award. In addition to his Bachelor of Science in Biomedical Engineering, Mr. Alvarez graduated with dual minors in Economics and Chemistry where he likewise excelled.  He was awarded the “Outstanding General Chemistry Student Award”  by  placing in the top three in a class of 300 students .  Mr. Alvarez is also very active in the community.  He has volunteered at institutions and in programs for children and the elderly.  He has already secured employment as a R&D and Design Engineer at DePuy Orthopaedics (A Johnson & Johnson Company) Trauma Division where he has worked as a Co-op technician for the past two years.