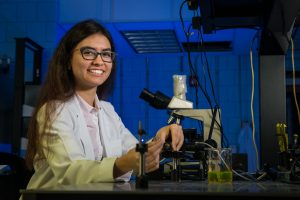 Nicole Sevilla always dreamed of going to medical school. In high school, she was a member of the Pre-Medical Club and volunteered at Broward General Hospital twice a week.

In her junior year at FIU, Nicole began working for FIU’s Biomedical Medical Photonics Laboratory. She played a key role in developing image processing algorithms to better visualize cells and to detect large cells which can be a sign of cervical cancer. During her senior year, Nicole was selected to join The Coulter Undergraduate Research Excellence (CURE) Program, where she worked on an imaging system aimed at measuring thermal radiation damage to the retina, non-invasively. As a result, she won first place at FIU’s 2017 Annual Undergraduate Research Day, part of the Wallace H. Coulter Biomedical Engineering Lecture Series.

Nicole also distinguished herself through volunteer work. She spent a summer in Texas volunteering at Texas Children’s Hospital. During her time at Texas, Nicole also interned at a lab in Rice University, where she was instrumental in the design of an imaging tool that makes it easier to diagnose cervical and oral cancer. The tool has been submitted for a patent.

After graduation, Nicole hopes to obtain a research position with the National Institutes of Health. Her long-term goal is to receive a doctoral degree in biomedical engineering.