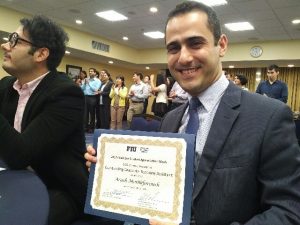 Arash Moshkforouh, from the Department of Biomedical Engineering, was recently awarded the UGS Provost Award for Outstanding Graduate Teaching Assistant. Arash was presented with his award at the Provost Awards Recognition Reception during Graduate Student Appreciation Week earlier this year.

“Teaching has always been one of my greatest passions,” said Arash. “Nothing engages or excites me more than helping a student learn.”

Arash earned his bachelor’s and master’s degrees in materials science and engineering from Sharif University for Technology, one of the most prestigious universities in Tehran, Iran. In the spring of 2013, he arrived at FIU, and started serving as a TA for the Department of Biomedical Engineering in the fall, 2014. This was not his first experience as a TA. About 13 years ago, as a sophomore, he served as a TA for ordinary differential equations and engineering mathematics in the Department of Mathematics at Sharif University. It’s a role he held for five academic years until he completed his master’s. During that time, he was also involved in the co-authoring of a book on ordinary differential equations in Farsi.

“As a teacher, I believe that motivation and love of learning, not intimidation of receiving a poor grade, should be the reason students attend a class and invest their efforts in studying the material.” Arash said. “This has been the goal that I have striven for ever since I started teaching.”

“Arash is very enthusiastic and patient when teaching; he’s approachable and friendly to students, and has an excellent ability to convey even the most challenging concepts in very simple terms,” said Jorge Riera, associate professor in the Department of Biomedical Engineering, and Arash’s co-major Ph.D. advisor.

“Arash has been the only T.A. I have had during my academic career that has truly gone above and beyond for his students. He makes sure that all of his students understand difficult concept and obtain the necessary knowledge to succeed in hard courses,” said Daniella Rojas, an undergraduate student studying biomedical engineering.

Arash recently defended his Ph.D. proposal, “A multiscale model of cerebral blood flow control: Inwardly Rectifying Potassium mediated Neurovascular Coupling (NVC)” under Dr. Nikolaos Tsoukias, and Dr. Jorge Riera. He is currently a research assistant under Dr. Jorge Riera on an NSF-funded project on cortical column modeling and cortical spreading depressions. Arash is involved with projects in collaboration with the University of Vermont, University of Minnesota, and Ohio State University. He plans to complete his Ph.D. by the end of 2018.