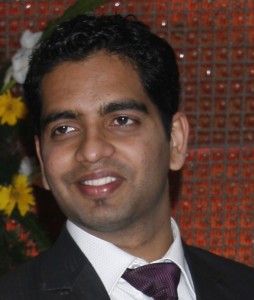 Rupak is currently a Ph.D. student in the Biomedical Engineering department at FIU. His current research focuses on the enhanced anchorage of tissue engineered cartilage with the native tissue. He has been involved in the Alpha Eta Mu Beta FIU chapter since 2008. At the time of his induction, he was a student in the M.S. program and he immediately expressed a desire to be involved in the chapter and run for the office of the treasurer. His first term in the office as President in Fall 2011. During his tenure, AEMB won the most active organization award within FIU, amongst 200 organizations on campus.  Because of his hard work, he was again elected as the President for the AEMB FIU chapter for the academic year 2012-2013.

Once again heartiest congratulations to Rupak for this achievement.