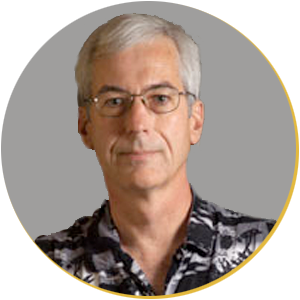 Dr. Michael Brown graduated from the University of Notre Dame with a BS in Biology in 1982. He subsequently attended the University of Miami where he obtained a PhD in Biochemistry and a MD degree. He worked in Research at the University of Miami and Bascom Palmer Institute. He worked in the Biomedical industry in South Florida as VP of Clinical Affairs at Bioheart, Inc. supervising clinical trials in heart muscle regeneration. Dr. Brown started teaching in the recently formed Biomedical Engineering Department at FIU in 2003 as an adjunct Instructor. He was hired as a full-time Instructor in 2005, promoted to Senior Instructor in 2011 and to University Instructor in 2017. Dr. Brown received a Uniiversity Faculty Teaching Award in 2012 and two College of Engineering and Computing Teaching Awards in 2011 and 2017. Dr. Brown is responsible for teaching the physiology courses in the department as well as the Clinical Rotations course which helps prepare the students to enter the Biomedical industry by visiting local companies and hospitals.

The specific aims are the determine to optimal concentration of skeletal myoblasts with which to seed Collagen Matrices (using various concentrations of cell and matrix concentrations) so as to obtain maximal growth of myoblasts with the lowest percentage of fibroblasts possible as determined by desmin staining. The Second Specific Aim is to determine the optimal concentration of collagen matrix to add to the skeletal myoblast concentration determined above so that it will remain viable for up to 96 hours at four degrees Centigrade in Bioheart’s proprietary injection media. The third specific aim is to determine the viability of the cells embedded in the collagen matrix, utilizing the results obtained from the above two experiments to determine the dilution of the final product in injection media that results in the least trauma to the cells when injected through Bioheart’s MyoCath or other catheters if deemed necessary. The final specific aim is to do ex vivo experiments in flow stimulation models simulating the injection of the MyoCell laden Collagen Matrix into the interior of a substance simulating heart tissue that has flow of a fluid similar in viscosity to blood to determine if retention is improved over the 10-15% commonly seen in many preclinical animal experiments performed by Bioheart and others (unpublished data).